Masks in Japan have a long history. A clay statue of a goddess wearing a sizeable triangular mask, created about 4,000 years ago, is designated as a national treasure. Clay masks for spellcasters in the late Jomon period have also been found in archaeological sites around the country. 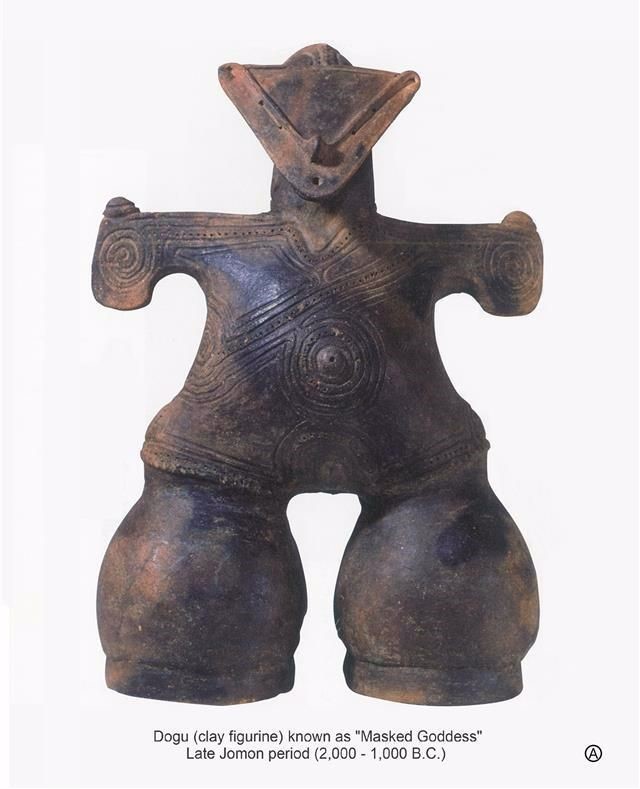 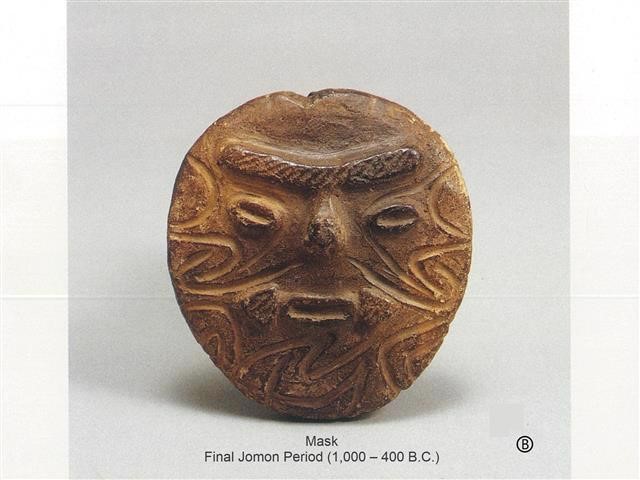 Initially, masks were an indispensable tool for religious ceremonies and rituals.


According to a legend, when Japan was in turmoil due to famine and epidemic, Prince Shōtoku Taishi (574~622) ordered Hata no Kawakatsu to create sixty-six special performances for the court, to chase away bad luck and bring peace. A different mask was used for each performance.


As the culture matured, Bugaku dances and music became popular for court ceremonies. In the 14th century, Sarugaku (later to become Noh and Kyogen) became popular among high-ranking Samurai. The quality of the masks used for these performances rapidly became more refined both artistically and technically. 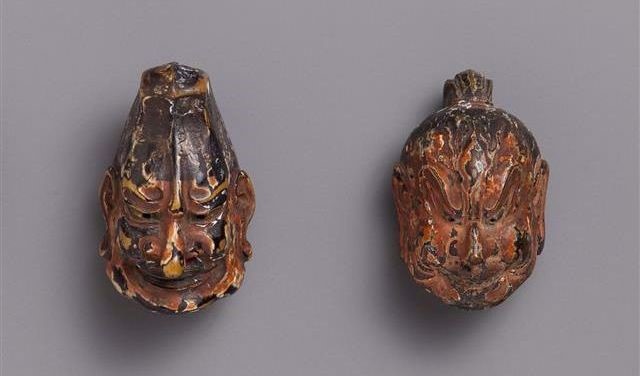 
Mask Netsuke
In the Edo period (1603~1868), the popularity of wearing tobacco pouches and Inro exploded. Demand for Netsuke grew, and various types of masks were adopted as motifs for Netsuke. In the two and a half centuries leading up to the late Edo period mask Netsuke were used more and more as personal accessories. It should be noted that Netsuke in those days were also used as a good luck charm or a talisman.


Materials for Mask Netsuke
As with other Netsuke, mask Netsuke came in many materials, including wood, tusk, stag antler, lacquer, ceramic, and metal.


The largest number of surviving ceramic Netsuke are of the Onko-yaki (Onko ware) type, in clay.


Onko-yaki is unglazed clay from mount Kinsho (or Kanabuyama) in Gifu Prefecture, a region known for lime mining since the Edo period, now no longer extracted. This clay contains hematite, which gives it a unique color.


There are various colors of clay, such as red, yellow, and purple. White-colored clay comes from Okachiyama.


Onko-yaki obtains a unique hue and shine when fired at the right temperature. Originally, Onko pottery became famous for its use of iron-rich clay for teapots, which enhances green tea’s flavor. It was prized by the Shogun’s, the Daimyo’s and the emperor’s families.


Types of Onko-yaki Netsuke
The characteristic of such Netsuke is that 99% of them are masks. Skulls like the one on the left hereunder, or other shapes are rarely seen. 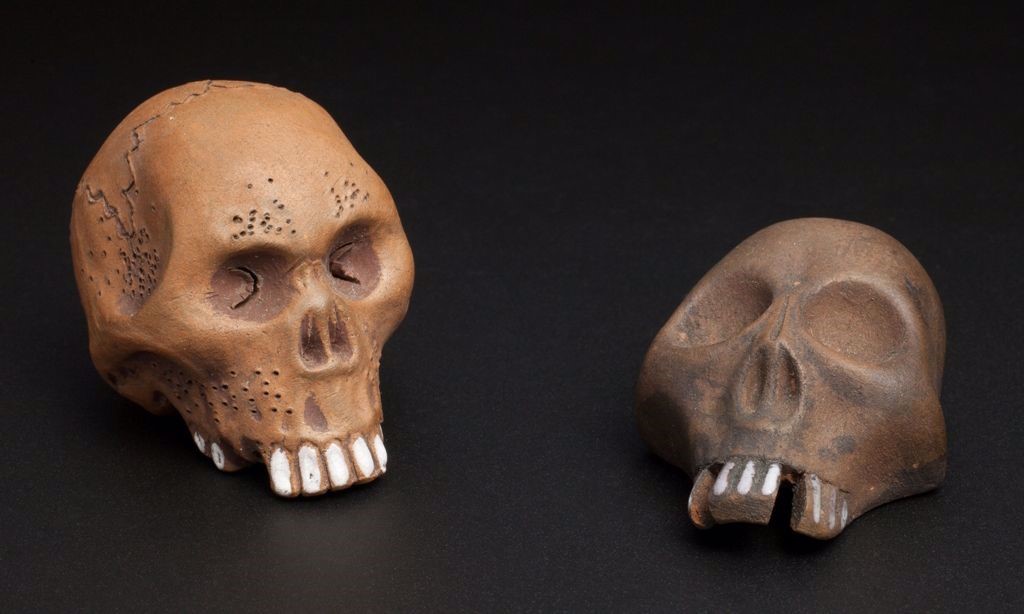 
The masks are overwhelmingly related to the classical arts. There are nearly 100 different kinds, including Noh, Bugaku, Gigaku, and Kyogen masks.


History of Onko-yaki ware Netsuke
They were produced from the late Edo period to the mid-20th century. After the Edo period, it was fashionable for the wealthy Japanese to wear western style costumes. Thus, it is presumed that the Onko-yaki mask Netsuke were rarely used, as no wear is seen on most pieces. Japanese prized these clay Netsuke as collectibles and to display them as home decoration.


The largest number of pottery mask Netsuke are Onko-yaki. These Netsuke are unglazed. The preparation of the clay and the way they are fired in the kiln create a unique texture that is very impressive. They are known for their robustness.


The prominent signatures (seals) are Sekisen (father and son) and Sekiho. Others, such as Onko (Shimizu Onko, Sekisen’s oldest brother), Futaminoura, and Shinryoen, are rarer. Some of the works are unmarked, and even some rare ones bear the mark “Made in occupied Japan”! 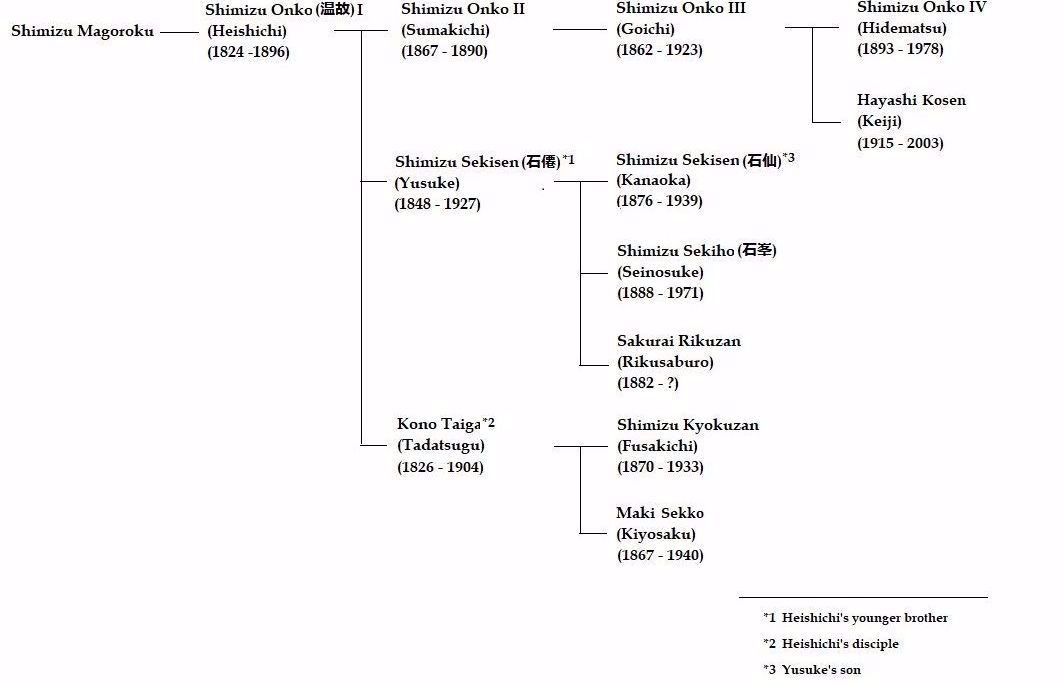 Shimizu Onko (1824~1896) was the creator of Onko ware (also known as Akasaka ware, Okachiyama ware, and Mino Banko). His real name was Heishichi. According to some studies, he learned about pottery under his grandfather (or uncle) Magoroku. He opened a kiln in Akasaka, Mino-Fuwa County, now Gifu Prefecture. 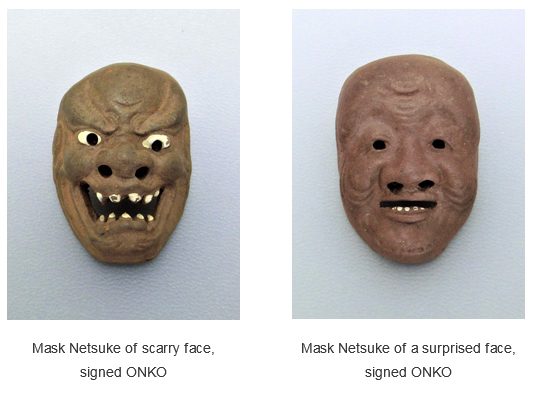 Shimizu Onko’s younger brother, Sekisen (1848~1927), studied under his brother for more than ten years. Afterward, he studied under the painter Mori Kinseki and other artists in Osaka. He also studied treasures at various shrines and historical sites.


Sekiho (1888~1971) was born in Akasaka (Gifu) and entered the Seto Pottery High School. He became an apprentice of the first Sekisen and mainly created teapots. He made mask Netsuke from 1935 to 1943.


Living in the same neighborhood, Sekiho was on friendly terms with Ueda Reikichi, the author of Studies in Netsuke.


All Onko potters won awards at exhibitions in Japan and abroad for their teapots creations and other tea utensils.


Many variations of Sekisen and other seals can be found. This remains a puzzle that we will try to figure out as soon as possible. 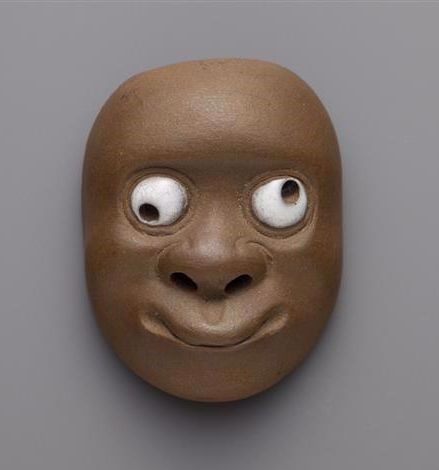 
Abroad, Onko-yaki mask Netsuke have been appreciated by W.W. Winkworth, M.T. Hindson, and R. Bushell, and nowadays by many other famous Netsuke collectors like J. Kurstin and G. Wilhelm.


The best thing about these mask Netsuke is that they are still unbelievably inexpensive for their quality! They usually sell for less than 100 US$, slightly more for a rare Onko signed one.