Happiness prevails during the festive season, Shiwasu (old term for December) has arrived!

For Japanese, the occasions of visiting temples and shrines increase, showing appreciation for the passing year and making wishes of prosperity and health for the coming year.

There and beside the known gods and spirits, another lucky charm to which Japanese are familiar to in the hopes of realising their wishes is Fukusuke. 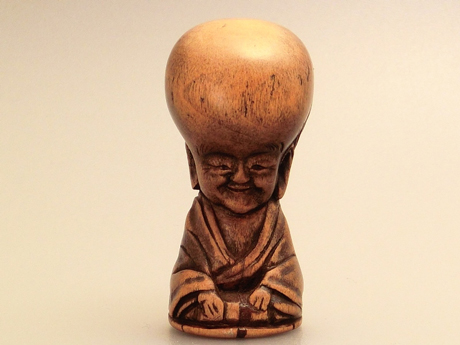 A character unique to Japan, Fukusuke (occasionally called with ~ san at the end to show familiarity or respect) is known for its macrocephalic apprearance wearing K amishimo (formal attire for samurai) and a cheerful smile. In several Netsuke books, it is often defined as an entertaining dwarf with an abnormally big head.

Its popularity in Japan as well as overseas as a Netsuke subject or a mere lucky charm may be due to such conspicuous design and a well-known superstition that Fukusuke items bring fortune to the owners. Surely those who have travelled to Japan have seen Fukusuke dolls at the entrance of shops and restaurants. It is said that the better care given to Fukusuke, the bigger fortune he may bring to the owner. 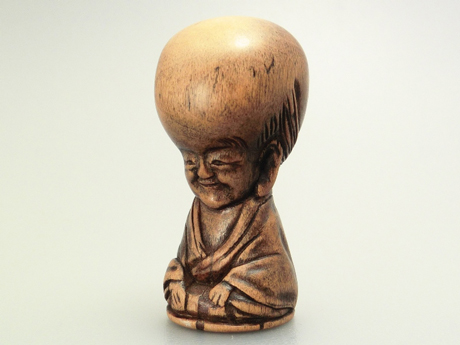 As the subject of Netsuke, the first Fukusuke design has been confirmed in Kyoto, Osaka, Tamba and Edo (Tokyo) between 18th and 19th century.

Usually depicted alone as seen in the pictures above, there are Fukusuke Netsuke shown on a pumpkin, or with a K umade (an auspicious ornamented rake) from Tori no Ichi (a fair held at shrines on the day of Rooster in November to bring good business and fortune), or with Masu (Hinoki wooden cup) well filled with F ukumame (large broad beans) in its hand.

There are a few theories as to the origin of Fukusuke and those who are speculated to be its model are:

Whatever the truth is, the character seems to have been based on a then-existing businessman of the merchant class engaged in a busy trade during the Edo period.

Fast forwarding a few centuries, Fukusuke may be recognised internationally as one of the characters on the album cover of Sgt. Pepper’s Lonely Hearts Club Band by The Beatles. Had Fukusuke’s fortune-beckoning power contributed to the quality and sales of the album if any? Again, whatever the truth, it is more fun to believe so…Afterall, fortune only comes to those who believe!